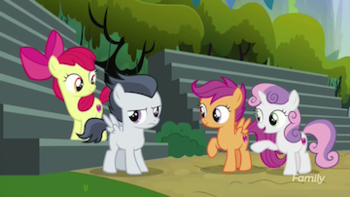 Rebel without a mark.
Advertisement:

The CMC are helping Kettle Corn try to paint to see if that's her special talent and get her cutie mark. When her time is done, they find a line of other fillies and colts waiting their turn for the CMC's help to get their cutie marks. The trio realize they don't have the time to help everypony one-on-one, and come up with the idea of starting a Cutie Mark Day Camp over at Camp Friendship, where they can organize group activities to help multiple ponies at once.

They advertise their idea in Ponyville the next day and get several eager fillies and colts. Rumble, watching from a distance, looks concerned about signing up, until his older brother Thunderlane arrives and suggests that maybe the Camp will help him get his cutie mark, giving him something to do while Thunderlane is at Wonderbolts training. Rumble reluctantly signs up.

At camp the next day, the CMC run their activities and everypony seems open to trying new things, and Kettle Corn discovers her special talent is in writing haikus, gaining her cutie mark. Rumble half-heartedly attempts each one, giving up on each too quickly. The CMC try to ask him what is going on, but he doesn't want to talk and leaves for the day, instead watching Thunderlane practice instead. They try to meet him there, but he has decided that he never wants to get his cutie mark.

The next day at camp, while the others are going through their activities, Rumble arrives and announces that the others shouldn't want to get cutie marks; instead, they should choose to remain blank flanks forever. He goads the others into joining "his" side of the camp, warning them that they will be forced to do what their cutie mark gives them for the rest of their lives, so that if they don't want to happen to get a cutie mark they don't want, they shouldn't do anything at all. Rumble's camp ends up leaving the fillies and colts lazing about all day, fearing that doing any type of activity may give them a cutie mark.

Confused, the CMC go to Thunderlane to explain what is happening. They find that Rumble really looks up to Thunderlane, and also wants to be in the Wonderbolts someday, so he's afraid that being "put into a box" with a special talent will prevent him from being a part of the Wonderbolts. This gives the CMC an idea.

The next day, the CMC announce they have a special guest that day - Thunderlane, who will help with doing some Wonderbolts-related activities including an obstacle course. One by one, the other fillies and colts (who have gotten bored with doing nothing all day) leave Rumble's camp for the CMC and join in, not wanting to miss out the chance to work with a Wonderbolt. Rumble eventually gives in and comes over, only to be surprised that Thunderlane is preparing a meal. Thunderlane tells his brother that while his cutie mark is for flying and speed, he learned to cook while sharing kitchen duties with the Wonderbolts, and is very glad he did. Rumble realizes that, despite his fears, getting a cutie mark does not prevent him from doing any other activities, and that his life will be filled with opportunities to learn new things. The CMC offer Rumble the chance to run their obstacle course, but he'd rather stay and cook with his brother.