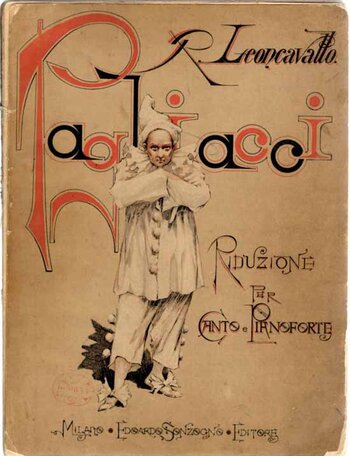 Put on your costume,
And powder your face.
The people pay to be here, and they want to laugh.
And if Harlequin shall steal your Columbina,
Laugh, clown, so the crowd will cheer!
Turn your distress and tears into jest,
Your pain and sobbing into a funny face — Ah!

Laugh, clown,
At your broken love!
Laugh at the grief that poisons your heart!
— English translation of Vesti la Giubba
Advertisement:

A cornerstone of Italian verismo ("reality") opera, Pagliacci is composer Ruggiero Leoncavallo's first opera, and his only one still regularly performed nowadays. The title is Italian for "Clowns".

Traditionally, before the opera opens, the hunchback clown Tonio delivers a lengthy prologue: don't treat us as make-believe; we are people of flesh and blood, and art is created with real love and real tears.

The story revolves around a clown, Canio. One day, Canio's troupe of Commedia dell'Arte comes to town, and will put on the peoples' favorite show that evening. When the rest of the troupe go away for a drink, Canio sits by himself, musing how he will not allow himself to be cuckolded and humiliated like Pagliaccio, the character he will be playing. Meanwhile, his wife Nedda worries that Canio may find out about her little secret, and her discomfort deepens with the appearance of Tonio, who professes his love. Nedda spurns his advance and mocks at his ugly appearance. Tonio tries to force himself onto Nedda, but she grabs a whip and strikes him. Tonio swears vengeance.

As Tonio leaves, the villager Silvio, Nedda's sweet-talking darling, comes by. He urges her to elope that night; she is ambivalent. The two share a tender moment together. Of course, Tonio sees all these - and he drags Canio in just in time.

Furious, Canio demands the name of the guy, but Nedda refuses to speak. Other actors urge Canio to calm down.

In front of a large audience during the play - which involves how Colombina (played by Nedda), under the knowing eyes of her servant Taddeo (Tonio), slips a sleeping drug in Pagliaccio's (Canio's) wine so that she can elope with her lover Arlecchino (Peppe, the fourth member of the troupe) — Canio derails the comedy to demand that Nedda comes clean. The crowd marvel at how emotive the performance is, but Nedda knows she is in deep trouble. She desperately tries to keep the play on track, which only fuels Canio's anger. He stabs Nedda on stage. Her dying scream gives away the name of her lover, whom Canio then kills. His vengeance done, Canio note In some stagings, and in the original version of the script, the line is given to Tonio, forming a Framing Device announces "La Commedia è finita!" — "The comedy is finished!"