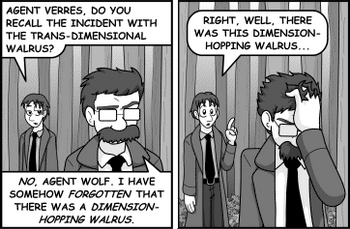 Agent Wolf is also Facepalm-Blind.
Leonard: For God's sake, Sheldon, do I have to hold up a sarcasm sign every time I open my mouth?
Sheldon: You have a sarcasm sign?
— The Big Bang Theory
Advertisement:

A common trait among characters who have No Social Skills due to an offbeat background, also The Spock, and those who are just that Comically Serious, or are just too young. These characters do not understand sarcasm. A lot of times, that can be (especially) annoying to the sarcastic ones in question.

Although characters like this are also often Literal-Minded, some aren't. Understanding sarcasm is a complicated process even when it happens automatically, because while "That's great," sometimes does mean that something is great, other times it doesn't. Everything depends on tone, gestures, and context. Thus, a character might understand the concept of sarcasm, and even use it, but fail to notice when others are using it.

Likely to cause an Insult Backfire. And do not do a Sarcastic Confession on them, as they'll take it at face value with all the attendant consequences.

A Washington Post contest once dubbed this 'gap' between a sarcastic speaker and the person who misses it the "Sarchasm."

Sarcasm Mode is an effort to explicitly mark sarcasm as such to prevent these types of miscommunications.

Compare Poe's Law, Crying Wolf, Do Not Do This Cool Thing, Schmuck Bait, No Sense of Humor, Cannot Convey Sarcasm, Blunt Metaphors Trauma, Super Gullible. Often seen in Captain Obvious. It's also a trait found in persons with Asperger Syndrome. It can lead to an I Was Just Joking situation, and is a common cause of Comically Missing the Point.

Alternative Title(s): Does Not Understand Sarcasm, Oblivious To Sarcasm