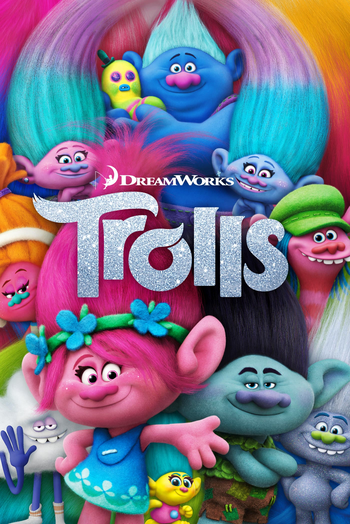 "Once Upon a Time in a happy forest, in the happiest tree lived the happiest creatures the world has ever known: the trolls. They loved nothing more than to sing, and dance, and hug. But then one day, the trolls were discovered by a Bergen! The Bergens didn’t know how to sing, or dance, or even hug. They were the most miserable creatures in all the land, and once they saw how happy the trolls were they wanted some of that happiness for themselves."
— Poppy, at the beginning of the film.
Advertisement:

Trolls is a DreamWorks Animation movie, based on the long-running toyline of Danish Troll Dolls created by Thomas Dam, which DreamWorks originally bought the rights to in 2011. It was released on November 4, 2016.

The Trolls themselves are a tribe of small, ultra-optimistic creatures with Prehensile Hair, who live in a forest in hiding from the Bergens, ogreish beings who can only derive pleasure from eating Trolls. The plot revolves around the adventures of princess Poppy (Anna Kendrick) and the Crazy-Prepared cynic Branch (Justin Timberlake), who must work together to save their world after several of their members are kidnapped by the Bergens' royal Chef.

A franchise was soon born. DreamWorks released a 20-minute TV special, Trolls Holiday, in November 2017, and aired a Netflix original series, Trolls: The Beat Goes On!, from January 19, 2018 to November 22, 2019. Alongside them came a number of literature and comic books.

I Will Get Back Up Again

Nothing will break Poppy's cheery disposition or slow her down!

Example of:
The Pollyanna

I Will Get Back Up Again

Nothing will break Poppy's cheery disposition or slow her down!