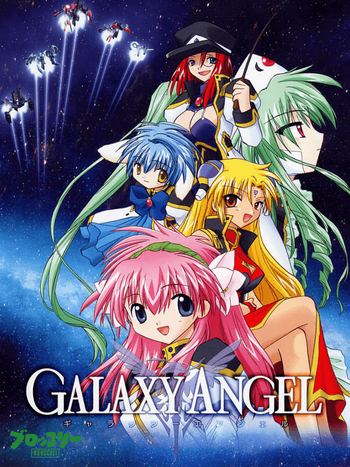 Galaxy Angel, the comedy space anime, was originally based off a series of Space Opera Dating Sim games published by Broccoli that dealt with Commander Tact Mayers and his adventures with the Angel-tai.note translated in the manga as "Angel Troupe," by the Fan Translation of the games as "Angel Wing" (which appears in text in-game but was until then widely presumed to be another name for Emblem Frames), and translated in the anime as "Angel Brigade" The (arguably more well-known) anime is a clear Alternate Universe, being a parody of Adaptation Decay in general by throwing out practically everything the game had to offer on purpose. This was mostly caused by the combination of the timing of the anime deal and delays in the game's production forcing the anime to air well in advance of the game's release. See the anime page for more information on the show.

In the gameverse, brand new commander Tact Mayers, barely aware of his own job and responsibilities, is thrust into the position of commander of the Elsior and its five ace pilots, the Angel-tai. They're set to protect Shiva, prince of the Transbaal Empire, after the disgraced former heir, Eonia, staged a coup d'etat. Shiva is more than he seems, too (but of course, you only realize this if you get all the special scenes), and all the while, Tact is falling for one of the Angels (If taking the Manga Canon Path, Milfeulle, although the games do not have a set canonical route). Galaxy Angel, Galaxy Angel: Moonlit Lovers and Galaxy Angel: Eternal Lovers cover this point in time, as well as the non-canonical Galaxy Angel EX.

The Galaxy Angel II Sequel Series taking place four years after the end of Eternal Lovers has Milfeulle trapped as a living battery to the gate between two universes. Tact, desperate to save her and devoid of his disbanded Angel-tai, is joined by the new Rune Angel-tai from friends and relations of the old ones and personally appoints new leader Shiranami Kazuya. The games in this series are Galaxy Angel II: Zettai Ryouiki no Tobira, Galaxy Angel II: Mugen Kairou no Kagi, and Galaxy Angel II: Eigou Kaiki no Koku.

Also see Galaxy Angel and Galaxy Angel Rune; though all of the characters have either been removed or exaggerated and the plot is completely gone, a few tropes are still shared.