Please Get Off Me 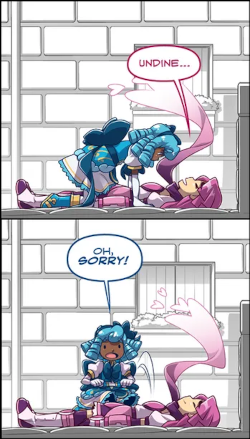 Affection can be crushing.
Two characters, typically a guy and a girl, end up in a heap on the floor, either the result of a scuffle, one of them pushing the other one down to protect them, or just a chance landing due to one or the both of them becoming temporarily airborne. They have a few moments to trade words, maybe seeming to flirt a little.
Advertisement:

Then the person on the bottom points out that the other is in fact sitting on them. Please Get Off Me? For bonus points, the person on bottom will start off by noting how heavy the person on top is, or that they landed on them hard enough to injure them.

This trope is the logical conclusion of The Glomp, Suggestive Collision or Living Crashpad. Often can result in one of the characters being an Accidental Pervert.