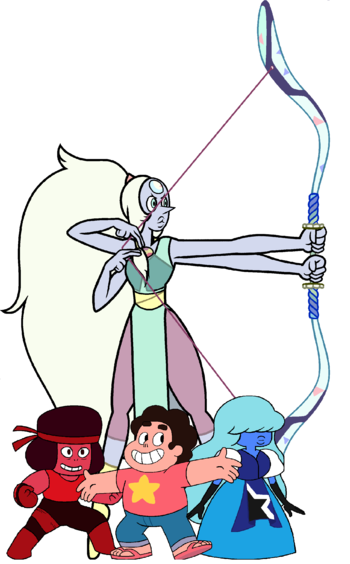 is a Steven Universe Alternate Universe Fic on Archive of Our Own and fanfiction.net

by iamconstantine. Also has an Ask Blog

. This story takes place in the Opal AU, wherein Opal is the permafusion and Sapphire and Ruby are unfused.

The story follows most of the show's plotline, with Steven living with his Gem guardians and attempting to control his Gem powers and having an everyday life in Beach City. Things become more and more tense, however, as Steven discovers that not only is there more to his world, but also learns of Homeworld's existence. Along the way, he learns more about himself, his family, and his elusive mother Rose Quartz.

A sequel, Twists & Turns can be found here

. The sequel picks up around the show's second season. Steven and the Crystal Gems are preparing themselves against Homeworld's looming threat. In the meantime, Lapis and Peridot have gone missing, Jasper is loose on the planet, and Steven encounters a mysterious figure in his dreams named Star.

open/close all folders
Tropes in Both Fics
Tropes in Opal, Sapphire, Ruby, and STEVEN!
Tropes in Twists & Turns