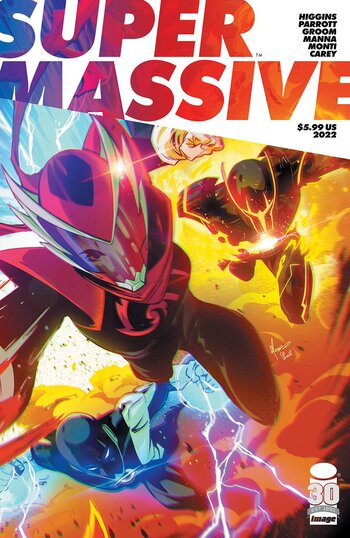 Supermassive is a prestige format one-shot comic, and the official start of the Massive-Verse. It is written by Kyle Higgins, Ryan Parrott and Matt Groom, with art by Francesco Manna, Melania Palladino, Simone Ragazzoni, Marcelo Costa, ABEL, Erica D'urso and Igor Monti. It is published by Image Comics and was released in February 2022.

When Inferno Girl Red (Cássia Costa) chases a monster from her home dimension into ours, Radiant Black (Marshall) and Rogue Sun (Marcus Randolph Bell) show up to help. However, all three run into issues with their powers that forces them to band together to stop the threat.

The one-shot is the official start of the Massive-Verse, and features the first appearances of Rogue Sun and Inferno Girl Red.

A sequel was announced at San Diego Comic-Con 2022 for an April 2023 release.