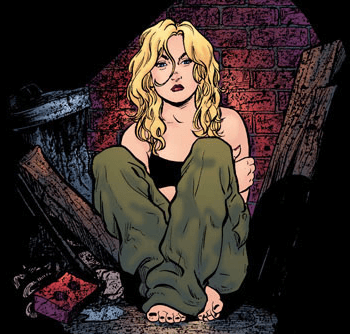 She's in a tight spot and may stay there.
"Oh! I have a heart to be stabbed in or shot in, I have no doubt, and of course, if it ceased to beat I should cease to be. But you know what I mean. I have no softness there, no—sympathy-sentiment—nonsense."
— Estella, Great Expectations chapter XXIX

These characters (often female) are coping with a Cynicism Catalyst, Despair Event Horizon, or Dark and Troubled Past by becoming as cynical, stoic, and/or badass as possible.

Her deep experience and emotional detachment almost always give the impression of competence, though she doesn't always live up to her own hype. Varying between Cool Big Sis, Emotionless Girl, Little Miss Snarker, and Snark Knight, she marks herself as more experienced and worldly than the other characters, even if the Competence Zone means she herself is barely out of her teens.

In fact, she can sometimes fill a mentor role for less experienced and more idealistic characters, all the while loudly expressing her irritation with said arrangement, so no one gets the impression she's softening up. Sometimes, this is to Jerkass levels; however, she is often a sympathetic Jerk with a Heart of Gold, giving an impression of independent toughness to hide a sincere affection for the other characters. In the latter case she'll almost certainly be a Mentor in Sour Armor.

This character was a hero herself once and failed miserably, or maybe she was abused in some way as a kid; whatever the case, her cynicism undoubtedly stems from some traumatic event in her past that destroyed her faith in just about everything. This revelation is normally accompanied by a Freak Out, said past often delivered in a bitter diatribe towards someone who proved a bit too stubborn in their desire to know what it was. At this point, tears are guaranteed, probably more of them the less she's expressed emotion in the past. She also has a 65% chance of engaging in serious physical violence against whoever is closest at the time. This is always treated seriously and Broken Birds have a tendency to be both prone to violence and very good at it, therefore, potential Love Interests should always prepare to be at least slightly maimed during these breakdowns.

If she is cured of her emotional torment, expect any of a number of paths. At best, she will continue on as a deeper and less emotionally constipated version of who she was before... but she may also fall prey to Good Is Dumb or mutate into a Satellite Love Interest or Satellite Character. Expect Hope Is Scary on the road to recovery, unless she has an Adrenaline Makeover. Once she recovers, she's quite likely to swear not to become one ever again.

A number of Romance Novels lean on this trope when the love interest of the heroine is an Anti-Hero with a scar from the past for her to heal. Sometimes involves a bit of that one as well. Women want to Heal the Cutie instead of Break the Cutie.

This trope can be summed up as Troubled, but Cute + Dark and Troubled Past.

Popular with the Byronic Hero. A Sub-Trope of Troubled, but Cute, which sometimes they start as before becoming broken. Overlaps with Stoic Woobie and Jerkass Woobie. Also see Dark Magical Girl when the Broken Bird happened to be a Magical Girl, Rape as Backstory and Rape as Drama for when the traumatic event involved sexual violence, My Greatest Failure for when the trauma was brought on by a mistake the character made (or thinks she made) and Shellshocked Veteran when her trauma was brought by warfare. Do note that in Real Life, not everyone who experiences trauma (even the same type of trauma) will react or respond in this way; just because they don't act like or come across as this trope doesn't mean they're lying about whatever it was they experienced.

The logical extreme of this becomes an Empty Shell. Compare/contrast Stepford Smiler, Stepford Snarker, and Sour Outside, Sad Inside, for characters trying to hide their Broken Bird state. Contrast Angst? What Angst? and The Pollyanna.