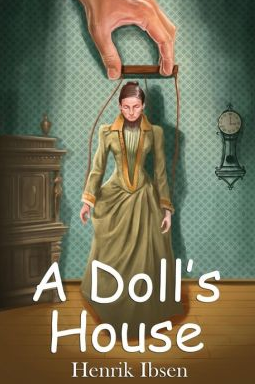 A Doll's House (Norwegian: Et Dukkehjem) is an 1879 play in three acts by Henrik Ibsen.
Advertisement:

The main character is a middle-class wife and mother, Nora Helmer, who spends most of her time acting like a child for the amusement of her husband, Torvald. The play revolves around her realization that she has spent her whole life being defined by her identity as a daughter, wife, and mother, and that both her father and her husband have treated her like a doll rather than a person.

The play is a scathing critique of nineteenth-century marriage, and it is very feminist in outlook for its time. Ibsen tended to see his own work as being primarily about the need of all people to be able to choose their own roles and paths in life, and he wrote several other plays that espoused these beliefs through the stories of male protagonists. However, simply by taking for granted that women were as entitled to this right as men, A Doll's House struck its original audience as shockingly radical.

A Doll's House was also written as a subversion of the well-made play, a genre of plays which essentially just changed the characters. Ibsen used the same plot points: a secret unbeknownst to Nora's husband, only known by her good friend; a fate hinging on a letter; and a villain set out to ruin everything. Ibsen manages to flip all of this around, confusing his 19th century audience.

A Doll's House provides examples of the following tropes: