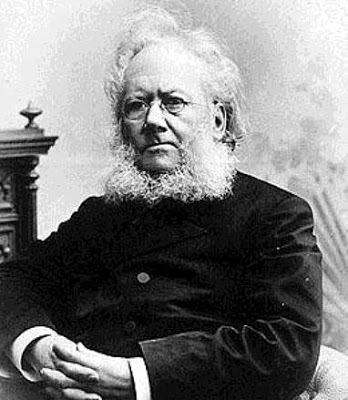 "To live is to fight with trolls in the vaults of heart and brain, to write is to sit in judgement of one's self."
Advertisement:

Many of Ibsen's plays were critiques of the morality of his time, residing very far to the cynical end of the Sliding Scale of Idealism Versus Cynicism and often having No Ending in a traditional storytelling sense. A noteworthy example is A Doll's House, about a housewife and mother of three who has been taking deceptive means to support her family by herself. Her husband never suspects, but treats her as a child in a big toy house (hence A Doll's House). The play as Ibsen wrote it ended with Nora flat-out leaving her husband after he reveals how he thinks of her: the last sound of the play is described as "the most famous door slam in the history of theater." However, for his German audience, Ibsen was pressured into writing a new ending, where the now self-assured and defiant Nora slips back into her meek role as a housewife when she is reminded of her children. Both endings are usually included in translations of the script, albeit with the German ending in significantly smaller letters.

Ibsen had a notable rivalry with Swedish playwright August Strindberg, who often accused Ibsen of stealing his ideas (claiming that Ibsen's Hedda Gabler, for example, was a ripoff of his own Miss Julie). Ibsen, delighted by the notion of having an archenemy, hung a huge portrait of a glowering Strindberg over his desk, and said that it helped him concentrate.

Ibsen's production went through a number of phases. The early stage was marked by a knack for historical plays, often with a Happy Ending, and from a later point of view, this part of his production is a long Early Installment Weirdness. His early tendency is slightly more idealistic than what he became in later years, but he also had to swallow some harsh criticism in this early stage. Notably the years between 1850 and 1856, when he wrote four plays, three of whom never entered his collected works. To be fair, all the young playwrights and poets in the 1850s were labeled "idealists". Come 1859, Ibsen had a serious Creator Breakdown and didn't write anything significant, be it poems or plays, for four years, after 1858. His "second phase" can thus be said to imply a lot of therapy.

Phase two overlaps roughly with the 1860s, beginning with a "revival" in 1862. This phase marks a transition from the early stage, and shows a more mature, but clearly still questing poet. At the same time, these are Ibsen's "angry years". Both Brand and Peer Gynt as well as a string of poems, show that Ibsen was more disappointed with his lot, and showed himself as a veritable Snark Knight. His early sentiments were turned inside out, and Ibsen seems to have made a point of "sacrificing himself" in each and every play. If there is an Author Avatar, be sure that he seldom survives the play in this period.

Come the 1870s and onwards, we find the Ibsen we know and love; the mature playwright with his realistic plays, preoccupied by his tendency to reveal all the corruption of the Norwegian bourgeoisie. He also stands out as an elitist, with little regard for the commoners. The lower classes tend to be set as morons at some level or another, and the big cheeses, like Old Werle and Proprietor Brack, or Consul Bernick, all get off scott free, while the people in the middle suffer. In this period, Ibsen clearly stated Silly Rabbit, Idealism Is for Kids!. Thus, we see a harsh deprecation of his youthful days.

His late phase, after 1885, shows a more introvert and symbolical playwright, searching for his roots, and he re-uses themes from early on, like the Medieval Ballads, but moulded in a different way. As the years passed, Ibsen was more into dissecting himself, and deconstructing himself in the process. His last three plays are chock full of this. He wrote his last play, When We Dead Awaken, in the fall of 1899. With a career launched in 1850, he set a solid mark on the entire second half of the nineteenth century.

Ibsen was punctual to the point of parody, and people in Christiania (Oslo) knew they could set their clocks by him, at least after he moved back to Norway in 1891 and settled in a flat in the western part of town. Every day, he went down to his favorite café, entering when the clock stroke twelve. He kept this habit up for thirteen years. The path he walked is carved with quotes from his plays, so if you're visiting Oslo, keep an eye out.

Ibsen continued his strolls through town until he got too sick to move around. He suffered a stroke about 1904, which made him incapable of social life, and finally died in 1906, hailed as the greatest playwright in Norway, a country he had less than good things to say about in his plays. In that respect, he seems an inversion of Henrik Wergeland. Wergeland had a vision of what Norway could become. Ibsen presented a nightmare, or at least a bad dream that never left.

Notable tropes found in the collected work of Ibsen: