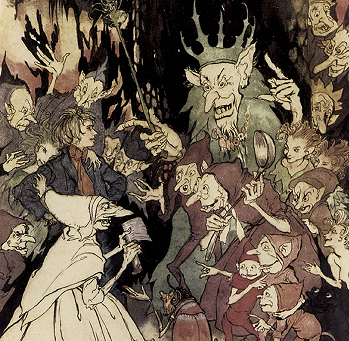 Åse: Peer, you're lying!
Peer: No, I'm not.
—The opening lines and most quoted part of the play
Advertisement:

Peer Gynt is an epic drama written by Norwegian playwright Henrik Ibsen in 1867. The play is a verse drama, telling the life story of the farm boy Peer, an unreliable poet who is prone to make up tall tales of his own experiences, often based on local folklore. This to the chagrin of the villagers, who have heard the stories before. Peer lives with his widow mother Åse on a downtrodden farm, coming from a family who has seen better days. During his youth, he trespasses on a rural wedding and runs off with the bride, after being rejected by the chaste Solveig, who apparently made a lasting impression on him.

After having his way with the bride Ingrid, who was sweet on him but had to marry someone else, he dumps her, only to get exceedingly drunk with three dairy maids in the mountain, and then finally to get abducted into the same mountain. Here, he encounters the Mountain King and his daughter, the green-clad Hulder, and has to pass some tests for the right to woo her. He goes some of the way, but rejects the trolls when they ask for permission to alter his eyesight for ever. Then the trolls beat him within an inch of his life before disappearing because of church bells, invoked by his mother, who seeks for him outside.

Alone in the mountain, Peer has to face the Boyg, an undefinable creature he cannot fight, and who will not face him. Peer finally collapses when the creature gives in because of hymns and more church bells, this time invoked by Solveig, who really wishes to save his soul. He wakes up dreadfully hung over, and manages to give away a silver button to her younger sister Helga.

Peer, now an outcast and outlaw, tries to make a living in the mountains, and Solveig comes to live with him. She decided that he really needed it, and would not live with anyone else. At the same moment, the green-clad Hulder arrives with an offspring she claims is his, and the realisation makes Peer go Face–Heel Turn on Solveig, and he flees the country completely for several years. He only makes a brief stop to visit his dying mother.

Peer lives large in foreign lands, earns a lot of money on slave trade and missioning, and is abandoned by his foreign friends off the coast of Morocco. From there, he finds his way to Egypt, playing the prophet and seduces a Bedouin chieftain's daughter who robs him, before he eventually tries his luck as a historian in Cairo. He ends up in a local madhouse, suddenly realizing how he got there.

Returning to Norway an old man, he ends up shipwrecked off the western coast, and comes home as an unknown beggar. He sees his old farm fallen to total ruin, is mocked by the villagers who believe him dead, and returns to the mountains, where he finally realizes that his life is wasted. He meets the Devil, the Mountain King and a button moulder, who tells him to be reshaped, as his soul was squandered. He finally admits defeat and runs to the only one who can still save him: Solveig, still waiting in his old cabin. The play ends with a "we'll see" from the button moulder.

Edvard Grieg composed incidental music for the play, which was performed at the premiere, with selections later published in the two Peer Gynt Suites. In the Hall of the Mountain King

are the most famous pieces.

The play contains examples of these tropes: