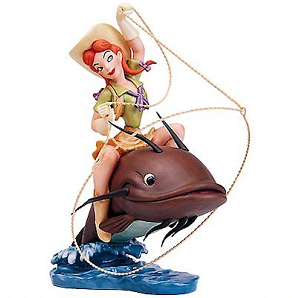 I don't know what's more unbelievable: her riding that catfish, or how gosh-darned beautiful that gal is!
Vanessa Ives: You didn't tell the truth. By my reckoning, you were a boy when General Custer died and 'tis well known there were no survivors.
Ethan Chandler: What we call a tall tale, darlin'.
Vanessa: Exceedingly tall.
Ethan: Vice of my nation. We're storytellers.
— Showtime's Penny Dreadful
Advertisement:

A tall tale is a story with unbelievable or outright impossible elements (such as an impossibly tall man, hence the name "tall" tale), told as if it were true and factual.

Tall tales arose, more or less, from braggy exaggerations and other cock-and-bull stories. They may contain exaggerations of actual characters or events, or they can be entirely made up. Common prototypes for tall tales are fish stories ("it was this big!") (which makes it transparent where the "tall" humor is coming from), as well as the the hunter's story, the war story, and the traveler's story. There's also significant overlap with the "Just So" Story, as many tall tales center on the origins of notable landmarks. Tall Tales are inherently related to Satire, although they are usually humorous and good-natured.

Some tall tales draw on myth or legend but while mythology may exaggerate the exploits of their heroes to make them more awesome, the Tall Tale is aware of its own absurdity and exaggerates so as to become ludicrous.

Note that "tall tale" is sometimes also used in a wider sense for any "story that isn't true" (particularly when the teller pretends it is true); in this looser sense it also covers Shaggy Dog Stories and campfire Ghost Stories (in parts of the US, "tall tale" and "shaggy dog story" are indeed synonyms).

Tall tales are also often told in a way that makes the narrator seem to have been a part of the story. If he himself is the hero, there are likely to follow outrageous Badass Boasts (often followed by the praise of one's own modesty). This kind of a narrator is a Munchausen or a Miles Gloriosus. Standard stylistic devices are also the insistence on factuality, and the pitying of naïve skeptics for their disbelief.

Tall tales may also include fantastic creatures. In the USA, the Fearsome Critters of American Folklore are a traditional subject of tall tales. In Australia, expect to see Yowies and Bunyips and Drop Bears, Oh My.

This page is for the Tall Tale genre. If a work is a tall tale itself, or a compendium of them, or the plot revolves around the telling of tall tales, then it goes in this trope. If it merely contains a braggart who is telling tall tales, but the tales aren't the focus of the work, then the trope you seek is Miles Gloriosus or The Münchausen instead.