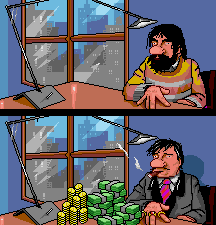 Character of poor or even modest economic standing becomes wealthy and successful. Can be the gimmick of an entire series, or the plot of a single episode.

Originating in the 18th and 19th centuries, it had been a Forgotten Trope, but the advent of the lottery and prominent Real Life examples have breathed life back into this.

The classic "Horatio Alger" version of the trope is that the protagonist lifts himself (or rarely herself) up to economic success by a combination of hard work and virtuous behavior. And a walloping dose of luck, which comes to the protagonist because of their work and virtue. It fell out of favor around The Great Depression and has never quite recovered.

More modern uses of the trope are more cynical, and may feature the character getting their wealth through unethical or illegal means, and discovering that wealth doesn't make them happy, (e.g. The Great Gatsby) and might include an Anvilicious statement on why sudden wealth leads to corruption. If the plot for a single episode, will usually feature the character becoming haughty and vain and eventually losing his or her money and returning to normal, showing that they never needed money in the first place. Occasionally played, is the Aesop of preferring personal freedom over the trappings of success, especially when that success comes at the cost of compromising your pride and dignity. In such cases, the person who goes from rags to riches realizes that they are virtually owned by those to whom they owe their success; something that frequently happens in the entertainment industry. The darkest and edgiest versions of this trope sometimes overlap with From Nobody to Nightmare. In the "Rise and Fall" Gangster Arc, the first half of the story will use this trope for the protagonist, and the second half will depict them losing everything, often including their life.

See also Prince and Pauper and Self-Made Man. When someone goes all the way from poverty to the throne it is Rags to Royalty. An Epic Warrior Prince who, by military conquest, goes from somewhat minor status to ruling an Empire is likely the Young Conqueror. A less noble example is the Nouveau Riche. Other variations can probably be thought of. One is for this to be done focusing on a group (say a family, a nation, or a sports team) rather than an individual that does this.

When a character just as suddenly loses their fame and fortune, that might be the Fallen Princess, Princess in Rags, or Riches to Rags.

Not to be confused with the chestnut filly who won the 2007 Belmont Stakes.