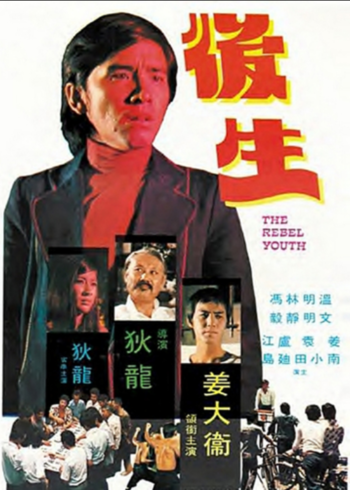 The Young Rebel is a 1975 action-drama film produced by Shaw Brothers, starring real-life bash brothers and besties, David Chiang and Ti Lung, the latter whom is also the director.

In a change of pace, for once Chiang and Lung took a dive in a different genre, a non-wuxia movie, but a contemporary film set in the present. The second film directed by Lung since the previous year's Young Lovers on Flying Wheels, this time instead of casting himself in the lead role, Lung brought in his best friend, David Chiang, probably as a return to favour considering Chiang had Lung starring in his directorial debut, The Drug Addict, also from the previous year.

Chiang plays the titular rebel, Xiang Rong, who grows up in the slums of downtown Hong Kong in the mid-70s after his father's death. Being the sole provider for his mother and sister, Xiang Rong is forced into a menial, boring job as a delivery boy, with his only true supporter being his childhood bestie, Gen Lai (Ti Lung). But after finding out Gen Lai is skilled in kung fu, and convincing Gen Lai to earn him a spot in the kung-fu academy, Xiang Rong quickly rises in the kung-fu academy with his skills, becoming their star student and the best fighter, but also the most dangerous, where a year later he was ultimately expelled due to his extremely violent tendencies. With both friends going separate ways, while Gen Lai went the lawful route and joins the police force, in a twist of fate, Xiang Rong ends up joining a local triad. Naturally, it's NOT going to end well.

The film is noted for being unusually ambitious, spanning over a period of three years instead of just a few months. Also known for being part of a delinquent youth sub-genre popular in Shaw Studios back in the mid-70s.

The Young Rebel Contains Examples of: