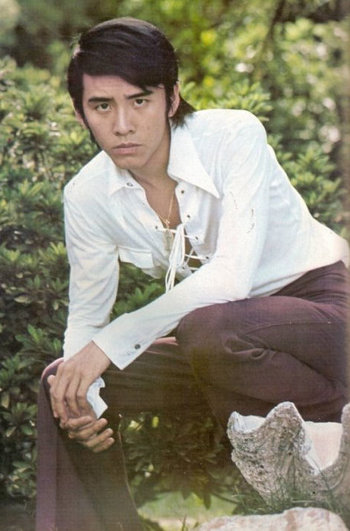 That's the most adorable killing machine I've ever seen! Look at him!
Advertisement:

Starting his career as a child actor at age four, David Chiang have been on the silver screen ever since Chinese movies are still in black-and-white. Spending most of his time lingering in the background note  (Chiang notably shows up in Golden Swallow, getting beaten up by Cheng Pei-Pei. He was 18 at the time) , he finally gains the attention of director Chang Cheh through his performance in Vengeance! which earns him the Best Actor award at the 16th Asian Film Festival. The studios, then seeking a suitable replacement for Jimmy Wang Yu (their previous megastar from the One-Armed Swordsman films) who is about to jump ship, realize that David Chiang's charisma, humour, snarky personality and generally handsome looks can draw an audience, and begin grooming him to be their next martial arts icon.

David Chiang would find a lifelong best friend with fellow Shaw Brothers actor, Ti Lung, then a protege roughly at the same level as him, where the actors played brothers onscreen in Vengeance!. From there on, comes a series of martial arts-themed period pieces where Ti Lung and David Chiang would co-star with each other, which populates the Shaw Brothers' catalogue of films throughout the early 70s, including The Heroic Ones, Duel Of The Iron Fist, The Anonymous Heroes, The Deadly Duo, The Water Margin, just to name a handful. note  The reason for the studios' frequent casting of both actors is because, after the whole fiasco with Jimmy Wang-yu, they decide that it's better to develop two megastars at the same time, just in case one leaves, they can still rely on having another.

Onscreen and off, David Chiang and Ti Lung remains the closest of friends, even sharing their lunches together from the same bowl

In the later years of the 1970s, Chiang would leave Shaw Brothers to start his own studio, Chang's Scope Company. Unlike Jimmy Wang-yu, however, Chiang's departure with the studios are on amicable terms, and he was in fact assisted and encouraged by Shaw Brothers' prominent producer Run Run Shaw on running his own business.

In 2004, Chiang was inducted into The Avenue of Stars on Victoria Harbour waterfront in Tsim Sha Tsui, honouring celebrities of the Hong Kong film industry.

Tropes relating to this performer's career and media: