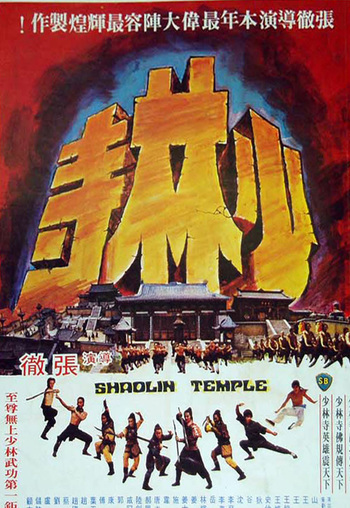 In the director's own words, The Shaolin Temple is Chang's grandest project to be released in 1976. Boasting a massive cast including Alexander Fu Sheng, Yueh Hua, Chi Kuan-chun, Lo Meng, Philip Kwok, David Chiang, Ti Lung, Shih Szu and several of the studio's top stars in the mid-70s, The Shaolin Temple is Chang Cheh's opus, a culmination of his collaborations with the Venoms Mob, his friendships with the other two members of the Golden Trio (Cheh, David Chiang, Ti Lung) and the results of a long partnership with Chang's long-time supporters and partners in the studios.

The Shaolin Temple is the final site of resistance against invaders from the Manchu Dynasty and the ultimate stronghold against tyranny. But the Temple's head Abbot is getting older, the temple is waning in strength, and in a last, desperate attempt to spread their messages of enlightening to the civilians, the monks have decided to admit practitioners not born or raised in the temple to be their students. Among those students are Fang Shi-yu (Alexander Fu, who will portray Shi-yu in several films after this), a young man from a once-wealthy family who had since fallen from grace, Hung Hsi-Kwan (Wang Wai), a righteous rebel who opposes the Manchus, Hu Hui Gan (Chi Kuan-chun) who is a labourer, Hu De-di and Cai De-zhong (Chang Cheh's favourite disciples, David Chiang and Ti Lung), a pair of close buddies who only wants a roof over their heads, and Ma Fu-yi, who have ulterior motives of joining the Shaolin monks.

As the practitioners bonds over their training, they are inevitably caught in the final battle as the Manchus, eager to wipe out all resistance, launches their assault on the temple.

The movie spawned a series of follow-ups from the same studio, including Five Shaolin Masters, Men From The Monastery and Abbot Of Shaolin, as well as a remake, The Shaolin Temple which is known as Jet Li's film debut.

The Shaolin Temple (1976) contains examples of: