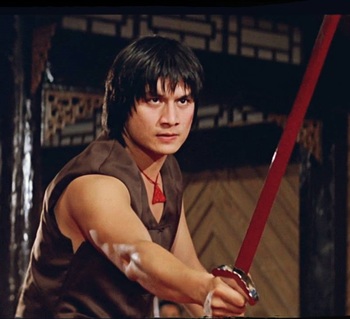 Mock his hairstyle if you want. The last mook who did that is now a bloody stain on that sword.note  Screenshot from My Rebellious Son
Advertisement:

The ninth child of Hong Kong businessman and politician Benton Cheung Yan-lung, Fu-sheng joined Shaw Brothers' Southern Drama School as a trainee at age 15, after failing in school and deciding not to pursue his family's involvement in politics. Under the tutelage of famed director Chang Cheh, Fu-sheng trained under Shaw Brothers' leading martial arts choreographer, Lau Kar-leung, excelling himself as one of the studio's first graduates. Due to Fu-sheng's hyperactive persona, easy-going personality, natural talents at a young age and versatility in various roles, he was even taken in as director Chang Cheh's fourth godson after Ti Lung, David Chiang, and Danny Lee. More often than not, due to his age, Fu-sheng was cast as The Runt at the End as the younger brother, sidekick, or protégé in movies.

Fu-sheng has made 43 films throughout his career from age 17 to 28, 23 of these which are Shaw Brothers productions including classics like The Avenging Eagle, Legendary Weapons of China, The Brave Archer trilogy, My Rebellious Son, Chinatown Kid and several other films. Fu's snarky, semi-comedic persona in the roles he portray would inspire future icons like Jackie Chan as a template to follow during the kung fu comedy boom of the late 1970s.

Much like in his movies, Fu-sheng in real life is a friendly easygoing fellow, despite his upbringing in a rich family, being the favoured pupil of one of Hong Kong's top directors, and achieving fame at young age.

Tragically, Fu-sheng would die in a car accident in July 1983 at age 28, while filming The Eight Diagram Pole Fighter. note  He appeared in the opening action scene before disappearing without a trace afterwards, his remaining scenes being cut due to his demise Fu-sheng's daughter with his widow, Jenny Tseng, was born posthumously via in-vitro fertilization.

Fu-sheng's niece, Jena Pang, has a special blog dedicated to her Uncle, which can be seen here