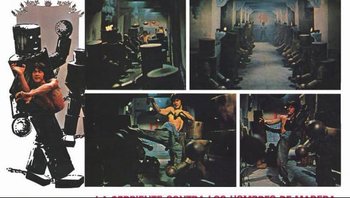 It is a little-known fact that as a kid, Jackie Chan would be trained in the same school as Mokujin and friends.
Advertisement:

Shaolin Wooden Men is a 1976 Martial Arts Movie starring Jackie Chan, then 22 years of age, an up-and-coming superstar which the studios are frantically grooming to become "The next Bruce Lee".

Chan plays Little Mute, a young man training in a Shaolin monastery, who as a child was reduced to becoming a mute after witnessing his father's brutal death. Training to make himself stronger for revenge, Little Mute can only become the most powerful fighter in the martial arts academy by passing the "The Shaolin Pathway of Wooden Men", a dark corridor containing thirty-six wooden mechanical wooden dummies that activates the moment anyone trespasses and will destroy anybody attempting to cross to the end.

Its your rather standard martial arts revenge movie, but the wooden dummies as an obstacle is a fresh, unique concept, one which is popular enough to, decades later, inspire Mokujin from the Tekken franchise.