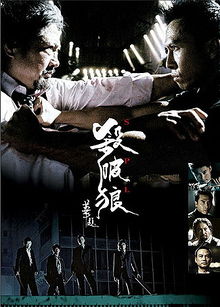 SPL: Sha Po Lang (Chinese: 殺破狼, released in the United States as Kill Zone) is a 2005 Hong Kong action film written and directed by Wilson Yip (Yip Wai-shun), and starring Donnie Yen, Sammo Hung, Wu Jing and Simon Yam. The film was released in Hong Kong on 18 November 2005. Yam portrays Chan Kwok-chung, a retiring police detective who resorts to the use of questionable methods in order to catch Wong Po (Hung), a ruthless triad boss, before he dies of a brain tumor. Donnie Yen plays Ma Kwun, Chan's protege, who will inherit the case against Wong after Chan dies.

It was followed by Sha Po Lang II: A Time For Consequences in 2015, which starred Wu Jing and Tony Jaa as the heroes.

Not to be confused with the Chinese danmei novel Sha Po Lang.