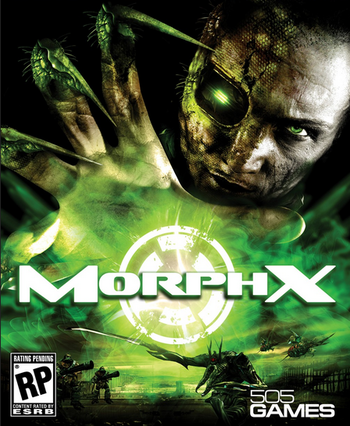 MorphX is a Third-Person Shooter for the Xbox 360, developed by Russian studio Buka Entertainment, published by 505 Games in Europe and North America and was released in 2010.
Advertisement:

In 2008, Earth was invaded by the alien swarm. Within the year, they had complete control of earth and had wiped out most of mankind. During 2009, the Swarm directed its effort to locate and wipe out the few remaining pockets of resistance. The year is now 2011, and mankind is still fighting to survive. Meanwhile, sightings of strange humanoid creatures are reported, their purpose unknown. Some believe they are the products of experiments the swarm has done on humans, while some believe it's the first of a new generation of swarm adapted to life on Earth.

2012, one of mankind's last bastions dubbed "The Laboratory", resides beneath the ruins of Moscow. There the survivors work tirelessly to stop this new threat.

You wake up in an alien hive, with no memory of how you got there. Swarm creatures attack you on sight, as do the human soldiers you come across, while calling you an infiltrator. With no choice but to kill to survive, you set out to find out what you are and what your purpose is.