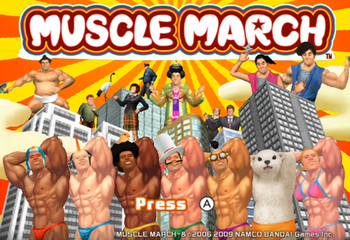 A 2010 WiiWare game by Bandai Namco Entertainment. In the game, you play as one of four bodybuilders (out of a pool of seven) in pursuit of a thief who stole their protein powder. Why? 'Cause it's funny!
Advertisement:

The gameplay itself is you and three other bodybuilders chasing after the thief. The thief crashes through walls and such, creating an Impact Silhouette that you have to match with the correct pose to pass through or lose your stamina. You have to keep this up until you catch the thief, while your bodybuilder buddies periodically slip on a banana peel and fall behind. You do this three times before you win the game and afterward, you can replay for another set of levels and thieves to chase.

This game marches on with these tropes: