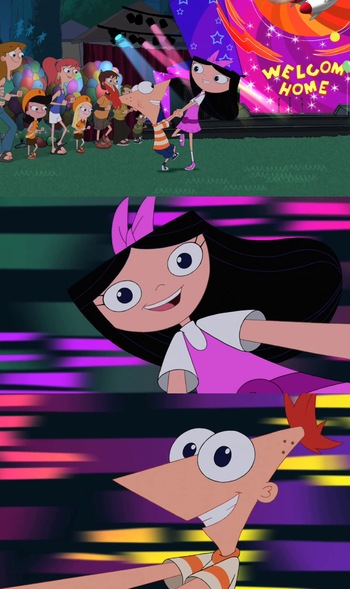 Another variation on the group version is the camera showing a close-up of one of the characters and panning to the next, one by one, or the character pass the camera as it remains stationary.

This is commonly seen in animated cartoons, and is normally used when characters are having fun or during a romantic moment. It can also be used in a Busby Berkeley Number.

Contrast Round Table Shot, where the camera pans from one character to another at a table, and Orbital Shot, when the camera circles around a character or subject. If the spinning is fast enough, it could lead to Centrifugal Farce.

Cole and Owen do this when they play in their new backyard, which Molly finds annoying.

Cole and Owen do this when they play in their new backyard, which Molly finds annoying.