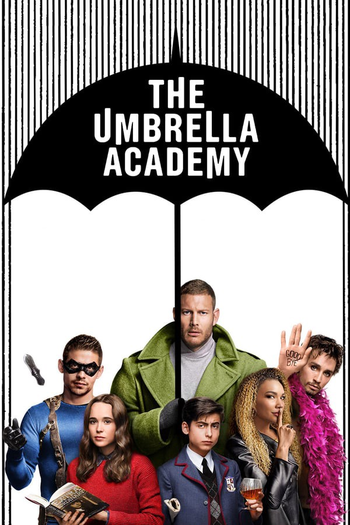 "Everything about our family is insane. It always has been." note From left to right: Diego, Viktor (formerly Vanya), Luther, Five, Allison, and Klaus. Not shown: Ben.
"As much as you must strive for individual greatness, and strive you must, for it won't come to you of its own accord — you must also remember that there is no individual stronger than the collective. The ties that bind you together make you stronger than you are alone."
— Reginald Hargreeves
Advertisement:

The Umbrella Academy is a 2019 Netflix original series based on the comic book series of the same name created by Gerard Way and Gabriel Bá, published by Dark Horse Comics.

In 1989, 43 extraordinary children were all spontaneously born on the same day. Of these children, seven are adopted by the wealthy inventor Reginald Hargreeves and groomed into superheroes. However, Hargreeves does not prove to be a good father figure and his inability to give emotional warmth to the children, along with his unwavering ambition to push them past their limits, inevitably scars them all in ways that last into adulthood.

Following Reginald's death years later, the siblings return to their childhood home, but the memorial is interrupted by the sudden return of their long-lost brother Number Five, who is somehow still a teenager after being missing for seventeen years. The dysfunctional brood of ex-superheroes must now work together to solve their father's mysterious death and stop the apocalypse that Five claims is imminent without coming apart at the seams due to their traumas, divergent personalities, and abilities. And if that wasn't enough, they also have to keep the Commission, Five's former employers who are devoted to ensuring that the end of the world proceeds as planned, off their backs.

Three seasons are available, with the latest being released on June 22, 2022. On August 25, 2022, it was announced that the show had been renewed for a fourth and final season.

The Umbrella Academy contains examples of:

Five incorporates his teleportation powers into his killing skillset. The fight scene is set to the jaunty "Istanbul, not Constantinople".

Five incorporates his teleportation powers into his killing skillset. The fight scene is set to the jaunty "Istanbul, not Constantinople".