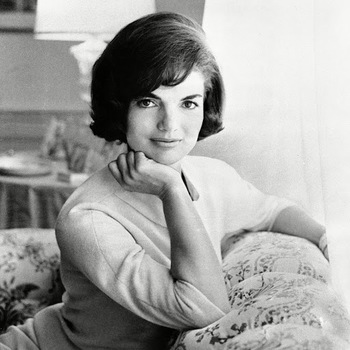 Jacqueline "Jackie" Lee Kennedy Onassis (née Bouvier; July 28, 1929 – May 19, 1994) was an American writer, literature editor, photographer, journalist, and socialite who became the First Lady of the United States as her husband, John F. Kennedy, became president of the US.

She was well known for her influence on American fashion and for helping decorate the White House with artifacts from previous administrations.

Her marriage to Jack was marked with tragedy of having a stillborn daughter named Arabella and a son, Patrick, who died from illness a few days after birth, and being right next to her husband when he was assassinated on November 22, 1963 in Dallas (see also the Zapruder Film page). She remarried in 1968 with Greek shipping magnate Aristotle Onassis; her married name during this time "Jacqueline Onassis" is the reason why she was nicknamed "Jackie O". She was widowed for a second time in 1975 and did not marry again.

Jackie and JFK had two children who lived to adulthood, Caroline and John Jr., who died in 1999 in a plane crash.

She died in 1994 from non-Hodgkin lymphoma.