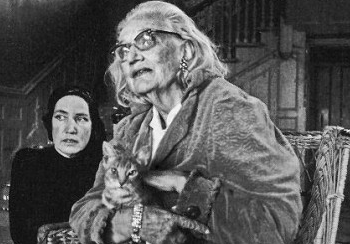 Grey Gardens is a 1975 Documentary focusing on two eccentric East Hampton recluses, near-bedridden Edith Ewing Bouvier Beale ("Big Edie"), and her daughter Edith Bouvier Beale, (known as "Little Edie") as they live their lives in their decaying mansion. The duo were the respective aunt and first cousin of former U.S. First Lady Jacqueline Kennedy Onassis, and rubbed elbows with America's elite before their fall from grace, losing their fortune and ending up with only themselves and the house to hold onto. Once a stately society home, Grey Gardens is now crumbling, full of garbage, deprived of running water and infested with cats, raccoons and countless fleas, having been left totally neglected by the residents for well over 30 years.

Both Big and Little Edie were delighted to be the subject of Albert and David Maysles' film, which is made up of the two telling anecdotes about their unusual lives, performing for the camera, giving their opinions on various topics and going about their daily routines- be it putting together an outfit from random bits and pieces found around the house, or tipping a bag of stale Wonderbread out on the floor for the raccoons. The resulting film is strangely haunting, camp, funny and sad all at once.

Big Edie died in 1977 at the age of 81, four years after the film was shot and the year after Grey Gardens was released in theatres. Little Edie sold the house in 1979 to Washington Post owner Ben Bradlee and his wife Sally Quinn, on the condition that it not be torn down. The house was extensively remodeled and still stands today. Little Edie lived in New York City, Florida, and elsewhere before her death in Florida in 2002 at the age of 84.

HBO made a dramatic film about the Beales, also titled Grey Gardens starring Drew Barrymore and Jessica Lange. A Broadway musical of the same name produced by East of Doheny also opened in 2006, winning several Tony awards. The documentary was parodied for the first episode of the Mockumentary Genre Anthology series Documentary Now!.