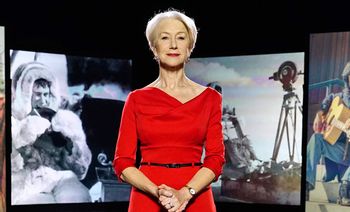 "Good evening. I'm Helen Mirren. And you're watching Documentary Now!. For the past 50 years, Documentary Now! has presented audiences with the world's most thought-provoking cinema. This season, to celebrate our golden anniversary, we take a look back at films that helped shape, change and innovate the world of documentary."
— Helen Mirren
Advertisement:

IFC Mockumentary Genre Anthology series, which debuted in 2015, created by Seth Meyers, Bill Hader and Fred Armisen, starring the latter two. Each episode is presented as part of a revered public television series devoted to documentaries, in which Helen Mirren introduces a presentation of a supposed classic documentary. What follows is a parody of a famous documentary or style thereof, done in meticulous fashion.

With Armisen (Forever) and Hader (Barry) busy working on other shows, season 3, which began on February 20, 2019, saw a slight change in approach. They scaled back their on-camera appearances, while Special Guests began taking prominent roles in each episode.

Episode 1: Sandy Passage
An in-depth look at the daily lives of two aging socialites and their crumbling estate. This mother (Armisen) and daughter (Hader) live in extreme squalor, but the documentarians find more than just dirt and clutter on the property.

A parody of Grey Gardens.

Parodies both Nanook of the North and Nanook Revisited, a 1990 retrospective about Nanook's controversies.

Episode 3: Dronez: the Hunt for El Chingon
An investigative piece made by Dronez, the multimedia organization led by Jamison Friend (Jack Black), which takes “hipster journalism” to the extreme. Their intrepid reporters enter the most dangerous places of Ciudad Juárez looking for notorious drug kingpin El Chingón.

A parody of Vice Magazine

Advertisement:
Episode 4: The Eye Doesn't Lie
An investigation into the wrongful conviction of Don Lentile (Armisen), a man sentenced to death for the 1976 murder of sign spinner John Patrick Winslow.

A parody of The Thin Blue Line.

Episode 5: A Town, A Gangster, A Festival
A documentary crew travels to Arborg, Iceland for the annual festival honoring American gangster Al Capone.

The only episode so far not based on a specific documentary, though it has similarities to a typical Les Blank

Parody of the 2013 documentary History of The Eagles.

Parody of The War Room

Parody of Jiro Dreams of Sushi.

Parody of the work of Spalding Gray, and in particular the film Swimming to Cambodia

Parody of Salesman, and wound up appearing as DVD Bonus Content on The Criterion Collection's Blu-ray of that film.

Episode 5: Final Transmission
Art Rock band Test Pattern is playing their final concert before going on a hiatus, and the tensions between singer Lee Smith (Armisen) and bassist Mark (Hader) are explored.

Episodes 6 and 7: Mr. Runner Up: My Life as an Oscar Bridesmaid
Two-Part Episode. Colorful producer Jerry Wallach (Hader) recounts the ups and downs of his turbulent five decades in Hollywood, including his collaborations with Italian star Enzo Entolini (Armisen).

Parody of The Kid Stays in the Picture

, with some material inspired by the theatrical documentaries The Source Family

A parody of D.A. Pennebaker's behind-the-scenes documentarynote Which was actually a Failed Pilot Episode for a proposed TV series about Broadway cast albums Original Cast Album: Company, a chronicle of the 14-hour recording session for the Stephen Sondheim musical. Another documentary dealing with a Sondheim musical, Best Worst Thing That Ever Could Have Happened

(about Merrily We Roll Along), is referenced as well. And, like Globesmen, it ended up as a bonus feature in the Criterion release of the Company documentary (this time on both the DVD and Blu-Ray), along with a new interview with the cast of the Co-Op episode.

Episode 4: Waiting for the Artist
Legendary performance artist Izabella Barta (Cate Blanchett) returns to her homeland of Hungary to stage a career retrospective exhibit, which she plans to climax with a new piece. But she's having trouble coming up with a good concept for it. Her ex-collaborator (and ex-lover) Dimo van Omen (Armisen) is also interviewed.

Parody of Marina Abramović: The Artist is Present

Episode 5: Searching for Mr. Larson: A Love Letter from the Far Side
Brad Adams (Armisen) is a huge lifelong fan of The Far Side. Deciding that his destiny is to make a documentary about Gary Larson, Brad (with his father as the cameraman) leaves his wife and newborn child at home in Colorado so he can drive to Seattle on a quest to find his hero.

, a 2013 documentary about Calvin and Hobbes, and more generally the subgenres of crowdfunded DIY documentaries aimed at specific fandoms (Bronies: The Extremely Unexpected Adult Fans of My Little Pony, the Super Smash Bros. Melee documentary The Smash Brothers

), and documentaries where the director sets off to find a Reclusive Artist (In Search of Steve Ditko, Paul Williams: Still Alive, the John Hughes documentary Don't You Forget About Me).

Parody of Let's Get Lost

Episode 7: Any Given Saturday Afternoon
2002 account of TV sports executive Rob Seger (Kevin Dunn) and his efforts to resurrect the Professional Bowlers League. Once one of the biggest draws in American sports, the PBL folded in 1992 due to bad ratings. Backed by investors, Seger has convinced big names like Billy May Dempsey (Michael C. Hall), Rick Kenmore (Tim Robinson) and Larry Hawburger (Bobby Moynihan) to renew their quests for bowling glory.

Parody of A League of Ordinary Gentlemen