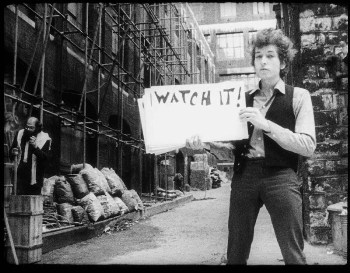 Dont Look Back (actually spelled that way onscreen, without the apostrophe) is a 1967 Rockumentary / Concert Film, directed by D. A. Pennebaker, about Bob Dylan's 1965 tour of the UK (his last tour without a band). It also captures the end of his romantic relationship with fellow folk singer Joan Baez, who he took on tour with him and would remain a regular collaborator of his through the 1970s.

The film is historically important for capturing Dylan at a crucial point in his career. He was busy making his controversial move from folk to electric rock music, but at the time of the tour, his early folk albums had just become smash hits in the UK, so he was dealing with throngs of fans expecting him to recreate a style that he'd already moved on from, and the boredom and frustration of that situation is a major subtext of the film. It's also famous for an iconic proto-music video in which Dylan shows a series of text cards while "Subterranean Homesick Blues" from his album Bringing It All Back Home plays in the background. As a result it was inducted in the National Film Registry in 1998.

Not to be confused with Don't Look Back, the English title of the 2009 French arthouse thriller Ne te retourne pas.

This documentary provides examples of: