Music / Bringing It All Back Home 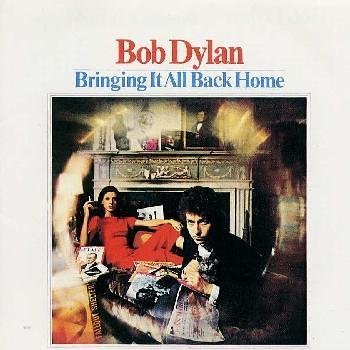 "Well, I wake up in the morning, fold my hands and pray for rain / I got a head full of ideas that are drivin' me insane / It's a shame the way she makes me scrub the floor / I ain't gonna work on Maggie's farm no more!"
Advertisement:

Bringing It All Back Home is the fifth studio album by Bob Dylan, released in 1965. It is generally seen as one of his best works and an important New Sound Album in his catalogue due to Dylan's use of electric guitar which upset Folk Music purists. The song is best remembered for the hits and fan favorites "Subterranean Homesick Blues", "Maggie's Farm", "Mr. Tambourine Man", "It's Alright Ma, I'm Only Bleeding" and "It's All Over Now, Baby Blue".

Also known in some countries as Subterranean Homesick Blues, after the leadoff track.

"Strike another match, go start anew
And it's all over now, Baby Blue."