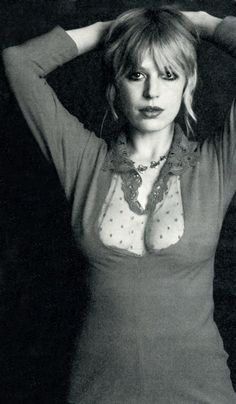 Marianne Evelyn Gabriel Faithfull (born 29 December 1946) is a British singer who began her career in the Sixties. A former convent schoolgirl, she was discovered by manager Andrew Loog Oldham. Oldham gave her a song he'd co-written with the guitarist and singer for a band he was managing. That song, "As Tears Go By," made her a star at the age of 17 and well became her Signature Song over the years. She made the transition from singing to acting, co-starring with Alain Delon in the movie Girl on a Motorcycle. By the late 1960s, her life and career had unraveled from drug abuse. She attempted suicide and lost custody of her young son.

For much of the 1970s, she kept a low profile, re-emerging in 1979 with the album Broken English. The album drew from punk, reggae, and synth-rock, but the most striking change was Faithfull's voice, now deeper with a distinctive smoker's rasp. She reinvented herself yet again as a chanteuse with Strange Weather, an album of torch songs that included a new version of "As Tears Go By".

In the 1990s, Faithfull teamed up with Angelo Badalamenti for A Secret Life and recorded an English-language version of The Seven Deadly Sins as well as several other Brecht / Weill songs. She continues her career as a singer/songwriter and interpreter well into the 21st century.

Tropes associated with Marianne Faithfull and her music include: