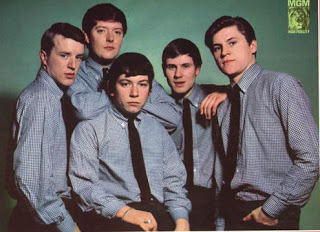 The Animals were a British Invasion band from Newcastle-upon-Tyne with heavy blues influences. One of several bands managed by producer Mickie Most (Herman's Hermits was another), their peak period was the mid-1960s. Their most famous hit was a cover of the traditional folk song "The House of the Rising Sun," which became one of the first non-Beatles British songs to top the charts in America after the Fab Four had made their debut. It was also a major influence on the emerging Folk Rock sound (particularly since it single-handedly inspired Bob Dylan to begin experimenting with a rock sound).

Lead vocalist Eric Burdon was a Blues fan who later joined the group War and became a major exponent of Funk, Hard Rock and Psychedelic Rock in the early 1970s. The group was notable for its prominent use of a Hammond organ played by Alan Price; they are among the first rock groups to use an electric keyboard instrument in their songs (and yes, they did probably beat the Beatles to it).

The band had a setback in 1965 when Alan Price left due to either fear of flying or a desire to be paid more money (accounts vary). He was replaced by Mick Gallagher for a short time, then by Dave Rowberry. By 1966, Burdon had embraced the hippie movement and started using LSD, becoming distant from the rest of the group. John Steel was the next to leave, replaced by Barry Jenkins for the last few singles and albums.

The Animals split near the end of 1966 and went their separate ways. Burdon formed a new version of the group, Eric Burdon and the Animals (with Barry Jenkins joining him), which became the outlet for his hippie-era material. When that version of the group ended, Burdon started the aforementioned War, which he left soon afterwards; they went on to have a successful career in their own right. Burdon later performed under his own name and as leader of The Eric Burdon Band. Alan Price became a folk singer-songwriter and bassist Chas Chandler became famous for discovering and managing Jimi Hendrix and Slade in the early 1970s. The band had two short-lived revivals, one in The '70s and one during The '80s, both of which led to new albums.

Three of the Animals have died so far: Chandler (of an aortic aneurysm in 1996), Rowberry (of an ulcer haemorrhage in 2003) and Valentine (no cause of death given, 2021).

Other hits of theirs include "Baby Let Me Take You Home", "I'm Crying", "Don't Let Me Be Misunderstood", "Bring It On Home to Me", "We Gotta Get Out of This Place", "It's My Life", "Inside-Looking Out" and "Don't Bring Me Down". Hits and fan favourites by Eric Burdon and the Animals include "Help Me Girl", "When I Was Young", "San Franciscan Nights", "Monterey" and "Sky Pilot".

Not to be confused with Animal, the Electric Mayhem's drummer.

Eric Burdon and the Animals