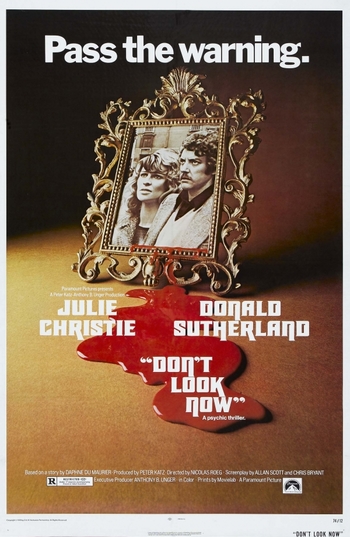 Don't Look Now is a 1973 horror/thriller film directed by Nicolas Roeg, based on a 1971 short story by Daphne du Maurier.

John and Laura Baxter (Donald Sutherland and Julie Christie) are mourning the death of their young daughter Christine, who drowned in a pond outside their house, wearing a bright red raincoat. While in Venice, where John is leading the restoration project on an old church, the Baxters meet two elderly sisters, Heather (Hilary Mason) and Wendy (Clelia Matania). Heather is blind, but claims to have "second sight", and says that she saw the spirit of Christine with her parents. Heather further suggests that Christine is trying to warn her parents of impending danger, and that John himself has clairvoyant powers.

John is skeptical of all this, and thinks the sisters are trying to dupe his emotionally-fragile wife. While John and Laura work through their grief and try to save their marriage, Venice is being terrorized by a series of murders. Then John notices a small figure darting around the city's alleys, wearing a similar red coat to the one Christine wore when she died. But, as John himself observes, "Nothing is what it seems."