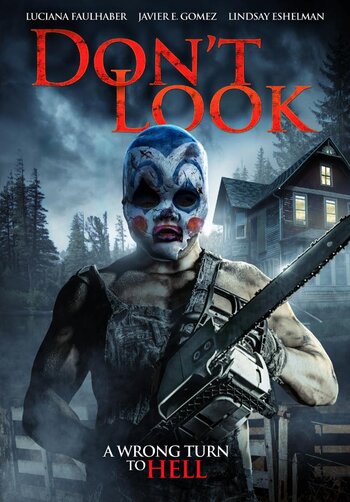 Don't Look is a Slasher Movie by Luciana Faulhaber.

Nicole (Lindsay Eshelman), Lorena (Luciana Faulhaber), Sebastian (Javier E. Gómez), Alex (Curtis K. Case), and Ted (Jeff Berg) are five youths who've decided to go to an old house out in the countryside for their Thanksgiving weekend. While there, they meet a man named Kelley (Jarrod Robbins) and his daughter Sherri Baby (Hailey Heisick), who are living on the property while it's rented to them.

Anyway, the youths settle in for a makeshift Thanksgiving dinner, and the usual kind of shenanigans kids like them get up to in horror movies like this one. And of course, there's someone else (Daniel Pappas) on the property with them, who intends to cut them all up.