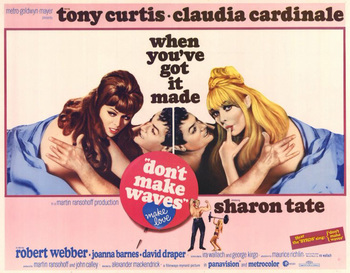 Carlo Cofield (Curtis) is road-tripping along the Pacific Coast Highway in southern California when a chance encounter with exotic Italian artist Laura Califatti (Cardinale) leads to the destruction of his VW Beetle, which apparently contained all of his worldly possessions. Owning literally nothing but his underwear, Carlo takes refuge with Laura, who as it turns out is the kept woman of Rod Prescott (Webber), the boss of a swimming pool company.

Carlo uses his knowledge of Rod's personal life for a bit of soft blackmail and lands himself a job selling swimming pools to the rich residents of Malibu, CA. Meanwhile, he meets and is instantly enchanted by the appropriately named "Malibu", a surfer girl (Tate). Further romantic complications ensue as Rod's wife Diane learns of his infidelity, while Laura starts falling for Carlo.

One of only a handful of films made by Sharon Tate before she was murdered by the Manson Family in 1969.