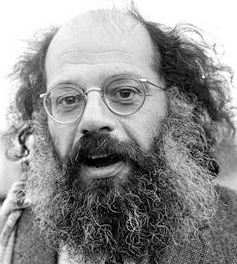 Irwin Allen Ginsberg (June 3, 1926 – April 5, 1997) was an American poet known as one of the central figures of The Beat Generation in the Fifties. His poetry was incendiary, attracting both praise and legal challenges, obscenity bans and censorship. His best known work is Howl (1955). Unlike most of his contemporaries of the Beat Generation, he remained a public figure well beyond the Fifties. In the Sixties, he was associating with many of the most notable hippies - his most famous appearance during this period was during the March on the Pentagon

, where he led the crowd in Tibetan chants while Abbie Hoffman attempted to levitate the Pentagon. As late as 1982, he was opening for The Clash, and guest-stars on their album Combat Rock.

Tropes in the work of Allan Ginsberg include: