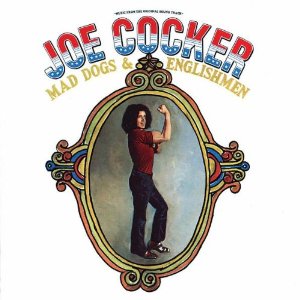 "Mr. Cocker's style is post-Ray Charles, post-almost anybody I can think of, a gravelly voice that seems to have been pushed beyond its endurance, but that always retains reserve with which to maneuver through Mr. Russell's complex arrangements. Their rock-blues utilizing the large choir into which the children and Canina sometimes wander, are immensely elaborate without ever being fancy, principally, I suspect, because Mr. Cocker is not a fancy artist."
— Vincent Canby, New York Times review

"Russell, then a Svengali to several artists, believed that the grind-it-out British belter with the Ray Charles obsession could be huge if presented in the right context. So he wrote screaming arrangements of songs Cocker had been singing for years, and positioned the singer at the center of a constantly moving (and frequently gaudy) revue. Bigger isn't usually better in rock. But Mad Dogs works, in part because the ensemble pushes Cocker in ways few rock singers are ever pushed. He sings Traffic's "Feelin' Alright" as a series of boxing maneuvers, slipping his ad-libs into the (few) open spaces. He feeds off the campy vaudeville backing for The Beatles' "She Came In Through the Bathroom Window". And though he enjoys the power of Russell's ensemble on the full-throttle rock numbers, Cocker is most persuasive when the heat isn't full force: This steady-rolling version of "Cry Me a River" deserves a spot in the hall of fame, as does the sultry version of Russell's "Delta Lady" that closes the program."
— Tom Moon, 1000 Recordings To Hear Before You Die

Joe Cocker was one of the breakout stars of Woodstock, opening the festival's final day with a cover-fueled set in which the animated British soulman introduced the Air Guitar to the world under the influence of any number of chemicals. In an effort to solidify his newfound fame, Cocker began a taxing support tour following the concert and lasting until early 1970. With the tour finally complete Cocker parted ways with his backing band and moved to Los Angeles to plan his next move only to learn the very next day that his manager had extended the tour with an eight-week stateside stand and that should he balk, Cocker would be effectively frozen out of returning to the United States from that point on.

Trapped with a surprise tour and no band to back it, Cocker called on Angeleno music mastermind Leon Russell to use his connections to get Cocker a pickup band on short notice. Russell seemingly used every last one of them, assembling a 35-piece behemoth behind the soulman and rehearsing it day and night for the tour which would become the Mad Dogs and Englishmen album and Concert Film.