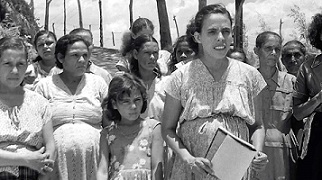 The League of Liberated Women
Advertisement:

Modesta is a short film from 1956, directed by Bernard Donziger and based upon a story by Domingo Silas Ortiz. It stars Antonia Hidalgo as the title character and Juan Ortiz Jiménez. All other roles are played by residents of the Soñadoras barrio in Guaynabo, Puerto Rico.

Modesta is a peasant young woman with three kids and another one on the way. Fed up with her authoritarian husband constantly nagging her to do chores and manage the household, she and other women in the barrio (neighborhood) organize the "League of Liberated Women" to fight back.This film

was named to the National Film Registry in 1998.