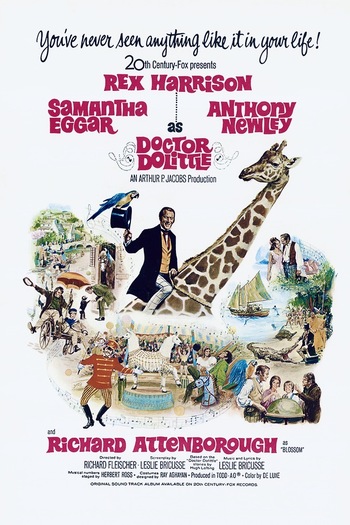 A 1967 American musical film, directed by Richard Fleischer and based on the Doctor Dolittle books by Hugh Lofting. It stars Rex Harrison in the title role, with Samantha Eggar as Emma Fairfax, Anthony Newley as Matthew Mugg, and Richard Attenborough as Albert Blossom. Script, songs and score were written by Leslie Bricusse.

The film had a Troubled Production, with hundreds of animals to wrangle, location shooting troubles, and Harrison throwing his weight around. Producer Arthur P. Jacobs even had a heart attack during production (but was happy to get another pet project of his, Planet of the Apes, greenlit by the studio). It was a critical and commercial flop, but managed to score two Academy Awards, for Original Song ("Talk to the Animals") and Special Effects.

Many years later, the film received a Screen-to-Stage Adaptation, with Mark Williams as Dolittle.