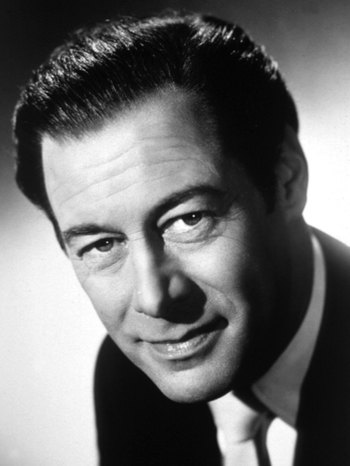 That's Sir Rex Harrison to you.
"The important thing is to learn through experience.
The more you do the more you learn. I don't think
anyone can teach acting from a podium."
—Rex Harrison
Advertisement:

He started his theater career in his teens in Liverpool and made his breakthrough appearance in a Terrence Rattigan play named French Without Tears, followed by his film debut The Great Game in 1930, before putting it aside to serve in the Royal Air Force in World War II.

He attained international fame in 1946 when he portrayed the King in Anna and the King of Siam, his first American film. The following year he starred as the eponymous ghost in The Ghost and Mrs. Muir. In spite of admittedly having a vocal range of "one and half notes," Harrison was offered the role of Professor Henry Higgins in the original production of My Fair Lady in 1956 and again later in the film adaptation in 1964. He won the Tony for the play and an Oscar for the film version.

Off screen, he gained a reputation for being very domineering and hard to work with, particularly after his success in My Fair Lady. The 1967 musical Doctor Dolittle cast him at the height of his power and he annoyed everyone with unreasonable demands, such as vetoing Sammy Davis Jr. being cast because he didn't want to work with an "entertainer" (read: someone who could sing better than him) and demanding Sidney Poitier instead, despite the inconvenient fact that Poitier was no musical performer. That was just the beginning of his antics, whether it was continually demanding pointless script changes or flinging anti-Semitic abuse at co-star Anthony Newley. It got to the point where Harrison was fired and about to be replaced by Christopher Plummer until he begged for the job back. As it was, Harrison's antics were one of many reasons why Doctor Dolittle failed spectacularly at the box office and his career never recovered.

He was also a serial philanderer, marrying six times in total and earning the nickname "Sexy Rexy." His marital problems, especially with his unstable fourth wife (actress Rachel Roberts), was known to disrupt filming almost as much as his own bad behavior. In one case, he divorced from actress Lilli Palmer to marry one of his mistresses, actress Kay Kendall, to provide for her care as she was dying of myeloid leukemia and wanted to remarry Palmer after her death, which ultimately didn't happen.

In 1989, Rex was knighted by Queen Elizabeth II. He later died of pancreatic cancer three weeks after his last stage appearance, as Lord Porteous in W. Somerset Maugham's The Circle.