Literature / The Story of Doctor Dolittle 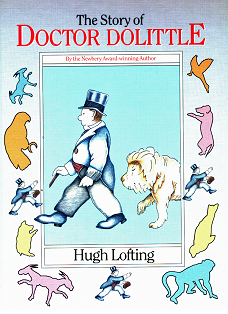 John Dolittle is a doctor living in the small village, Puddlebynote short for Puddleby-on-the-Marsh. He is a highly competent and well-respected physician, but he is also somewhat of an animal hoarder, which drives away almost all of the paying human customers. The only exception is the Cat's-meat-man (a man who sells meat for pets to eat, not a man who sells the meat of cats) who's never had any problem with animals. John Doolittle even drives his own spinster sister away when he adopts a crocodile, and he's left penniless with no one to take care of his house or manage his money.

His parrot, Polynesia, teaches Dolittle how to speak certain animal languages, which fascinates him. And despite his dire financial straits, he remains happy and carefree. One day he receives a message from a swallow begging him to travel to Africa to cure a disease epidemic among the monkeys. Being flat-out broke, he borrows money and a ship and sails across the ocean, adventure waiting just around the corner