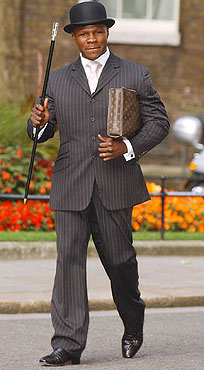 Taxi to Sloane Square, old bean!
"O.J. [Simpson] never gave back. Well, you see any parks around here named for him? Any children's centers? See, now Jim Brown cared about black people. He was an activist. He spoke up. Once O.J. made his money, he split and never came back. He became white."
— Christopher Darden, The People v. O.J. Simpson: American Crime Story

Cultural, ethnic, and racial identities are tricky things. They're both internal and external: how we self-identify and "present," but also how we're viewed by those both inside and outside our own group. Sometimes, this all manages to conveniently align, and how we self-identify is more or less the same as how others see us and how we "feel." Other times, it's more complicated.

Sometimes, a character superficially appears to belong to a certain racial or cultural group, they were raised as part of that group, they self-identify as part of that group... but somehow they just don't "feel" (either to themselves or others) like part of that group. They lack certain opinions, tastes, or behaviors commonly associated with their group and may share some with another group that they're not superficially a part of, causing them and/or others to question their identity. This often overlaps with No True Scotsman if the criteria for "belonging" to the group seem self-serving, incidental, or arbitrary.

A common example in American works is the African American character who shares the stereotypical tastes and traits of white characters and isn't sure if they're (or are accused of not being) "black enough." This sometimes happens to characters who are Black and Nerdy. They are often a subject of mockery when compared with other black characters who feel more secure in their "blackness" and subject to unflattering comparisons with Token White characters who are considered "blacker" than they are. This can easily involve Unfortunate Implications if traits like being uneducated or poor are assumed to be somehow "blacker" than being well-educated and successful.

Straight Gay characters also sometimes run into this if they're considered "less gay" than Camp Gays, although the increasing prevalence of the Straight Gay trope makes this less of an issue as time goes on.

This can lead to accusations of Category Traitor, but the two tropes do not necessarily overlap. A category traitor is defined by a (real or accused) lack of loyalty to their nominal category. The whitest black guy usually likes their category just fine (if not, see Boomerang Bigot and Stop Being Stereotypical) and in some cases may even act out of an exaggerated sense of loyalty to it in order to compensate. They're just not really sure if they belong.

If this uncertainty about their cultural identity leads them to consciously attempt to emulate and appropriate a different culture's identity, they might become Pretty Fly for a White Guy (or pretty white for a black guy, pretty Japanese for a Maori guy, or any number of other variations). Usually, however, it's more of an inversion or subversion of that trope, in which they try and fail to embody the stereotypical identity of their own group and wind up looking even less fly than the actual white guys, and meanwhile continue to display traits associated with another cultural group despite themselves. If they attempt to use fantastical means to become a member of a different group, see Trans Nature.

A Sub-Trope of Double Consciousness and Heritage Disconnect. Compare Outside/Inside Slur, which are commonly applied to such characters, and Stop Being Stereotypical, which is when a character (who might or might not be the whitest black guy) is worried that others in his group are confirming negative stereotypes. Compare and contrast Pass Fail, which is trying and failing to present as part of a group other than one's own. See also False Dichotomy, when there's nothing mutually exclusive about two groups the character feels caught between, and No True Scotsman, when the criteria for "belonging" are self-serving, incidental, or arbitrary. Not to be confused with But Not Too Black, which is about casting choices.