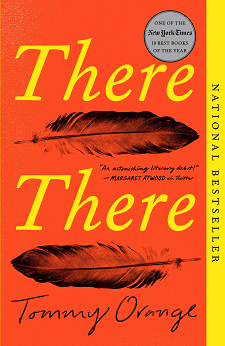 "Don't ever let anyone tell you what being Indian means. Too many of us died to get just a little bit of us here, right now, right in this kitchen."
Advertisement:

There There is a 2018 novel and the debut work by author Tommy Orange.

The book focuses on twelve "urban" Native American characters around Oakland, CA, and their lives before they all convene at a pow wow in Northern Oakland. It examines their individual struggles with heritage and identity in the modern world; through their arcs, Orange showcases the mistreatment and abuse Native Americans have faced throughout the centuries, and how the United States sanitizes it and continues to leave them with nothing.