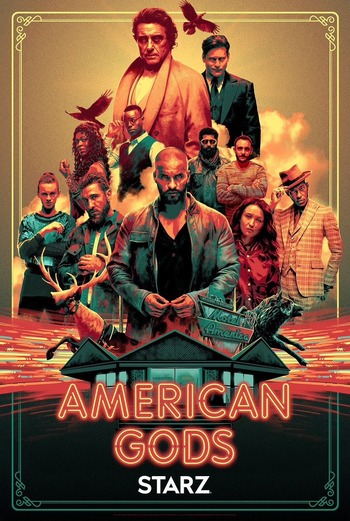 "What came first? Gods — or the people who believe in them?"
— Mr. Wednesday
Advertisement:

American Gods is a TV series based on a novel by Neil Gaiman. It was developed by Bryan Fuller and Michael Green for Starz, and premiered on April 30, 2017. The first season adapts the first third of the book, following Shadow Moon (portrayed by Ricky Whittle) and Mr. Wednesday (Ian McShane) on their journey across America. The show expands on the book by giving more spotlight to some of the book's supporting characters, including Laura Moon (Emily Browning), Mad Sweeney (Pablo Schreiber) and Bilquis (Yetide Badaki), as well as the antagonists like Technical Boy (Bruce Langley) and Media (Gillian Anderson).

On May 11, 2017, about 2 weeks after the premiere episode debuted, Starz announced that they would be picking up the show for a second season.

Bryan Fuller and Michael Green exited the show after the first season due to disagreements with Starz about the budget. Their replacement for Season 2 was Jesse Alexander. Charles “Chic” Eglee was showrunner for Season 3.

that the show had been cancelled due to low ratings (a 65% decrease from season one). The producers are negotiating to produce a TV movie that would conclude the series, as season three ended on a cliffhanger.

Example of:
The Nothing After Death