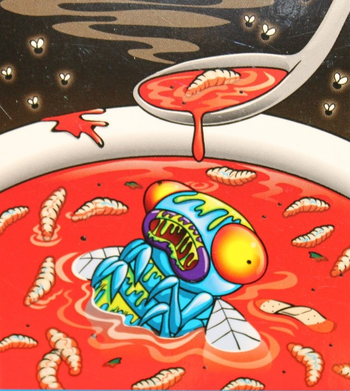 It's not just the flies in the soup you have to worry about sometimes.
Advertisement:

Flies, especially house flies, are attracted to the smell of rot. From garbage to feces to corpses, they love the stuff. And their babies love it too! As such, something gross can be easily be pictured as even grosser if swarms of maggots are covering it, while characters that happen to be maggots have this gross trait often magnetized towards them in their personality.

However, as mentioned as Somewhere, an Entomologist Is Crying, maggots are rarely used to play actual maggots. In their place, mealworms, a type of feeder beetle larvae, are often used.

Compare Flies Equals Evil for their grown-up form's brand of stink attraction. See also Scavengers Are Scum for other corpse-eating animals depicted in a negative light, and You Dirty Rat! for similarly gross animals.