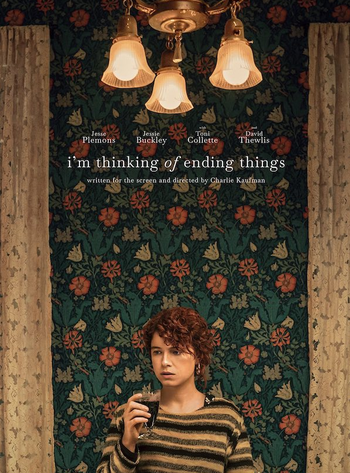 "...Once this thought arrives, it stays. It sticks, lingers, dominates."
"Most people are other people. Their thoughts are someone else's opinions. Their lives a mimicry. Their passions a quotation."
— Oscar Wilde
Advertisement:

I'm Thinking of Ending Things is a 2020 film, the third after Synecdoche, New York and Anomalisa (in part) to be written and directed by Charlie Kaufman. It was adapted from the novel of the same name by Iain Reid. Following announcement of its production in 2018, it was released on September 4th, 2020 by Netflix.

It revolves around a young woman (Jessie Buckley) going to meet her new boyfriend Jake (Jesse Plemons)'s parents (Toni Collette and David Thewlis) at their remote farm in the middle of a snowstorm, all the while apprehensive as she has been having second thoughts about their relationship. The ensuing interaction only makes things more stressful from there.

As is par for the course for Kaufman, the film is both incredibly surreal and notoriously hard to categorize, perhaps more so than any of his previous works. It has been summed up as a psychological drama, but where it goes after the events summarized above has received a range of labels including postmodernism, psychological horror, and black comedy.

"Goin' outside
Git myself a bride
Git me a womern to call
My own..."