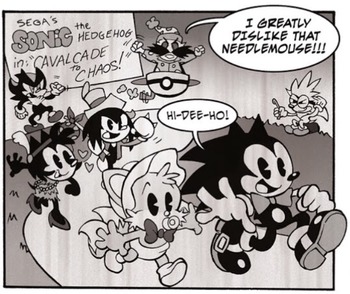 Ah, "the classics".
"Mickey had to be simple. We had to push out seven hundred feet of film every two weeks. His head was a circle with an oblong circle for a snout. The ears were also circles so they could be drawn the same, no matter how he turned his head. his body was like a pear, and he had a long tail. His legs were pipestems, and we stuck them in large shoes to give him the look of a kid wearing his father's shoes. We didn't want him to have mouse hands, because he was supposed to be more human. So we gave him gloves. Five fingers seemed like too much on such a little figure, so we took away one. There was just one less finger to animate. To provide a little detail, we gave him the two-button pants. There was no mouse hair, or any other frills that would slow down animation."
— Walt Disney describing the design of Mickey Mouse
Advertisement:

Inkblot Cartoon Style is the cartoon style most prevalent from The Silent Age of Animation. Most historians refer to this as Rubber Hose Animation because characters' arms, legs and pretty much everything else are usually animated as if they were made of rubber tubing and without elbows or knees. In many cartoons in the very late Twenties and early and mid-Thirties, not only does everyone dance to the background music, everything dances to it as well. The style sometimes falls into Accidental Nightmare Fuel territory because of the its tendency toward surrealist humor.

Characteristics of Characters of the Inkblot Cartoon Style:

If this style is used in a cartoon that was made after the 1920s/1930s, it results in Retraux. It often, but not always, goes hand-in-hand with Rubber Hose Limbs, which originated from this style. Often a Mocky Mouse.

Examples from the 1930s and earlier:

The beginning of "Bite This!" has Norbert dream himself into a world like the classic Disney shorts.

The beginning of "Bite This!" has Norbert dream himself into a world like the classic Disney shorts.