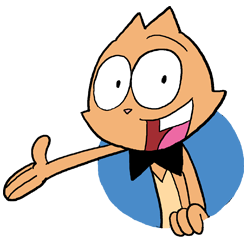 He's the newest cartoon star! Well, he tries to be, at least.
Advertisement:

Conroy Cat is a Webcomic and later Web Animation series by Alex Dudley. Dedicated to animation fans, The Cartoon Chronicles of Conroy Cat is about the titular character doing odd jobs to get his name out and try to become famous in Cartoon Land. Most of the strips feature characters from other animation works, such as Comic Books, Anime, and lots of Western Animation. There have also been "toon training" sessions, in which Doggy D. Dachshund, a toon based on old black and white animation toons and one of the few recurring characters, teaches Conroy how to harness the power of the "funny bone" to create all the gags that you see in cartoons. It often lampshades the common gags and devices of animation. It ended in 2011.

Doggy also has his own series of shorts called Toons These Days, where he rants about modern day animated shows. It initially ended as of December 29th, 2012, until Dudley decided to start a second season with two segments per episode: Doggy's usual ranting and Conroy giving a more analyzing review. Halfway through the season, the two segments split into two separate shows under the same "Toons These Days" title. On October 13th, 2014, Alex announced that Toons These Days was picked up by Channel Awesome of The Nostalgia Critic fame, and episodes started rolling out there on October 21st. After the pick up, Doggy D. Dachshund even made a cameo appearance at the end of The Nostalgia Critic's review of Teenage Mutant Ninja Turtles (2014). In 2015, the Conroy strips are back in production, but only for 1 or 2 pages per month.

The whole body of work can be seen here

. Conroy Cat shorts and Toons These Days shorts can be seen on Alex Dudley's YouTube channel

, the latter being where he showcases all his toon ideas, including his Web Animation series, Kassandra Goddess Of Awesome, currently on hiatus indefinitely. Conroy Cat and Kassandra: Goddess of Awesome cartoons are now on Battery POP (here

), a cross-platform kids' media website where cartoons, music and other such works can be viewed and voted up, with things that "pop" receiving more funding.

The Cartoon Chronicles of Conroy Cat provides examples of the following tropes:

Toons These Days provides examples of: