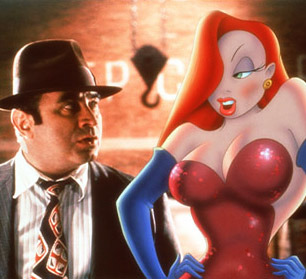 On the Internet, "toon" is usually a short qualifier for any animated character done in a North American style.

More specifically, a Toon is a character whose personality (and usually appearance) is greatly exaggerated. Even for the The Comically Serious, comedy colors everything the character does and he is often unable to complete the most basic tasks without falling victim to a number of improbable variables. A probable reason is that many thrive on a consistent, tolerated kind of chaos. The whole idea is often clearly represented by having the characters acknowledge themselves as Toons and Breaking the Fourth Wall.

The few animated shows in the West that attempt drama, such as King of the Hill, shy away from using certain tropes associated with Toons in an effort to be taken seriously. After all the animation is merely a medium of showing the story and doesn't necessarily mean that the characters are considered animated in-universe. See Animation Age Ghetto. For obvious reasons, this is a lot more capricious in anime.

The most famous example is probably the universe portrayed in Who Framed Roger Rabbit.

The word "Toon" may be used interchangeably with "Character" in some MMORPGs. As in, "Which toon do you want me to play for this raid, my fighter or my cleric?". This especially applies to Toontown Online, in which this is actually what the players are officially called in-game.

Not to be confused with the tabletop game by Steve Jackson or Newcastle United.