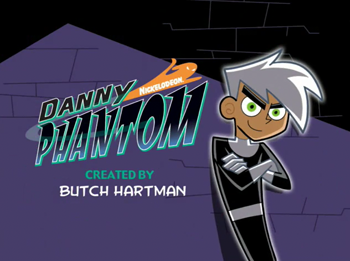 Danny Phantom is an animated Superhero series created by Butch Hartman (of The Fairly OddParents fame) for Nickelodeon.

First airing overseas in 2003, the United States in 2004 and running until 2007, the series revolves around the adventures of 14-year-old Danny Fenton, the son of professional ghost hunters. (No, not those. Or those.) While generally less than competent, his parents' engineering skill is phenomenal, leading to inventions such as the Fenton Portal, a machine that opens up a path to the "Ghost Zone", an odd kind of afterlife where, like in its spiritual predecessor, ghosts are both beings of the dead and creatures originally from that other dimension. Danny explores the portal and accidentally activates it, imbuing his molecular structure with ectoplasmic energy.

Now with a set of formidable ghost powers, Danny eventually decides to use them to protect humanity from various spectral threats. Unfortunately, since most of the town (including his own parents) fears and hates ghosts, Danny has to keep his Danny Phantom identity and his ghost powers secret. Fortunately, his best friends, Sam and Tucker (and his sister Jazz, who quietly knows Danny's secret as well), are his constant companions, who give him vital practical and emotional support in his self-appointed role.

Halfway through the airing of the second season, Butch Hartman announced the series would end with a shortened, 13-episode third season. Dedicated fans orchestrated various petitions and small organizations to overturn the decision, but, despite these protests, the production of Danny Phantom finished in February 2007, with no plans for future episodes. Despite this, Danny Phantom now maintains a cult following that regularly calls for a series revival, with Hartman being one of the most vocal about this.

All episodes are currently (as of Jan 2021) also available on Apple TV.

On July 21, 2021, a Graphic Novel based on the series was announced to be in the works. Named Danny Phantom: A Glitch In Time, it is set to be released in 2023.

Tropes that apply to the following movies go to their designated pages: