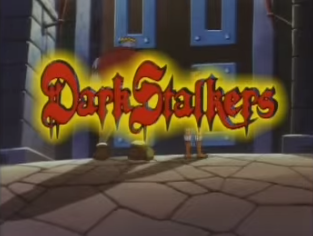 Supernatural things. Magic and sorcery. They're back. From out of the gloom stalk your worst nightmares. Ghouls. Zombies. Werewolves. Vampires. You can't be sure what lurks out there in the darkness of night.
We're the Darkstalkers!
Pyron, intergalactic collector of planets wants the Earth, and he's going to get it even if he has to wake the undead. He summons Demitri, lord of the vampires, to launch a reign of terror to release a plague of monsters and bring humans to their knees. But, other Night Warriors are on the prowl. Monstrous, awesome contenders with bizarre fighting powers. Immortal creatures locked in battle to decide the fate of the world.
Advertisement:
We're the Darkstalkers!
It's enough to make your blood run cold.

Darkstalkers is a short lived cartoon series made by Graz Entertainmentnote The company behind The Tick, G.I. Joe Extreme, and Skeleton Warriors for First-Run Syndication, and is based on the Capcom fighting game series of the same name.

The plot is that the fire elemental Pyron wants the Earth to collect. When he came 4,000 years earlier, the Earth had lots of monsters who viewed him as a god. Now, Pyron is disappointed by the billions of common, grubby little beings with no powers, magic, or mutations. His ball asks him why he does not just kill all of man. Pyron says he wants the old races awakened, starting with Demitri Maximoff, the vampire lord. Once that proves to be a success, the two suck up Morrigan Aensland, Anakaris, Bishamon, and Lord Raptor. However, Jon Talbain, Rikuo, Sasquatch, Victor, and Felicia manage to avoid the beam. In addition, Felicia partners up with Harry Grimoire, a descendant of Merlin. Ultimately, the escapees decides to team up in order to stop Pyron.